I’m sure you wanted to hear more about football but nope – I’m going to show you the cutest bank in the world!  In case I never mentioned it I collect those cute bluebirds that were made in Japan in the ‘50s. 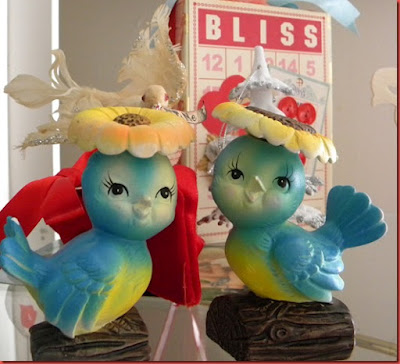 I’ve never found any of these bluebirds locally they have all come from ebay or etsy but here’s what super antiquer Jeff got me for my birthday that he found at our own antique mall! 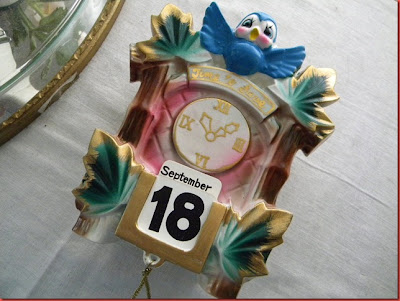 It’s a bank that hangs on the wall and the little pepetual calendar cards had never been opened!

My Saturday is supposed to be cool with lots of rain…yea.  Perfect day to visit some Pink Saturday blogger buds and watch some Longhorn football!

Wow - I thought I'd never be able to access my blog again - it keeps telling me I'm signed in somewhere else.  So anyway - wanting to find something for Beverly's Pink Saturday I thought this purple picture on the Tron or whatever it's called had a pink look to it at dusk right before kick off. 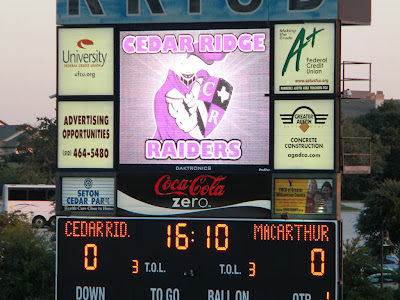 Round Rock Cedar Ridge played San Antonio MacArthur at our home stadium for the "Up and Coming" game.  "Up and Coming" not "homecoming" because there's no alumni to come home! My grandson started as a sophomore in a brand new school and is now a senior in the first class that will graduate from Cedar Ridge.  What an exciting game.  We had the lead most of the first half.  And then part of our fabulous band and Royalty presenting the Royal Court.
Our Award Winning band is huge: 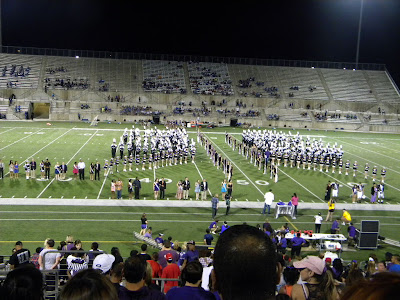 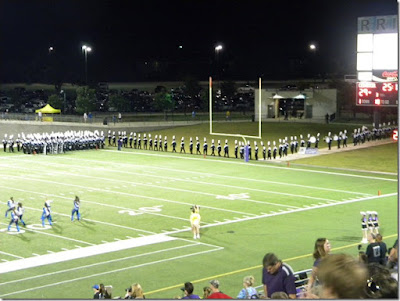 Here they are forming CRHS. 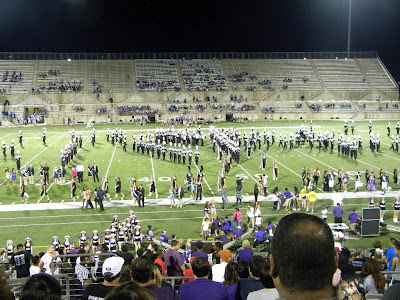 After a nerve racking second half where we went back and forth....CR took the lead with 37 seconds left 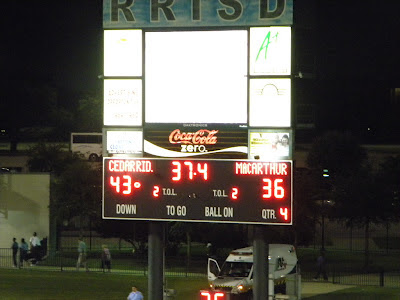 And thinking it was won SA answers with a touchdown and extra point of their own with 4 seconds left sending the game into overtime…and then double overtime!
But in the end with the Raiders one point behind after the touchdown they make the gutsy choice to run the two extra points. 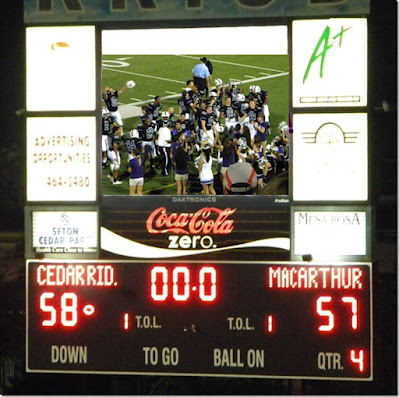 My grandson is the long snapper for field goals, extra points and plays defense and played a fabulous game.  That's him in the middle #52. As soon as the game ends  the team runs to the sidelines and the band plays their Alma Mater for them and I don't know why but it makes me cry every time I see this.  I'm glad they don't realize that time is fleeting and these halcyon days will soon be a distant memory. 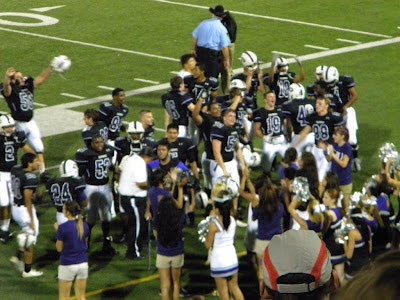 Okay now that I've made you sit through the game recap I'll share some of the mums - random cutees who let me take pictures to show you! 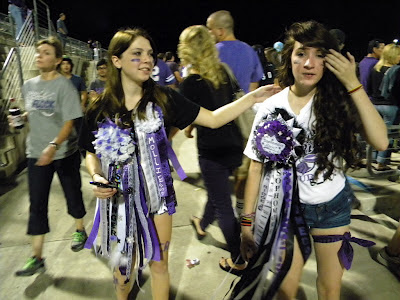 FYI - the lady in the background? Her shirt says "Flock" - it's the new band routine - I know...the first time I saw it I was like "What the flock?"
So that's it for me from Your Crafty Little Page Sports Center!This is Longhorn Nan signing out!
at 9:53 PM 1 comment:

Aren't these beautiful? I snapped a pic of these beautiful dried roses at a florist the other day just to share with my pink blog buddies. That's not my share today though...no, I've got crafty things, too! 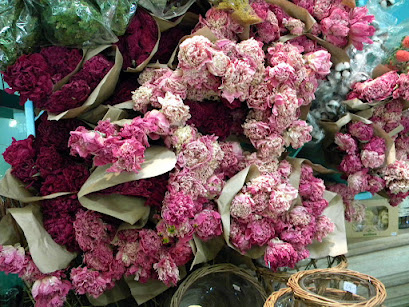 This is what I thought I'd share today - my pages I did for the "Painted Pages" edition of my last Itty Bitty Book.  I tried my hand at watercoloring. 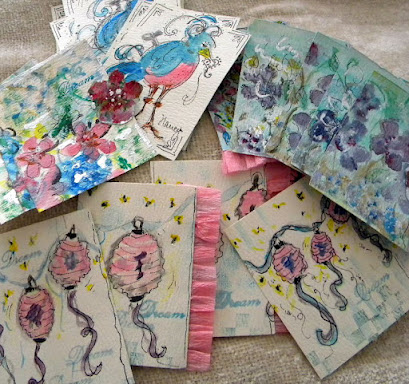 I saw a similar bird on Flickr and this is my take on that.  Sort of a goofy looking windup bird! 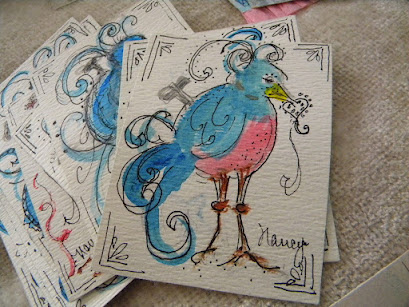 Then I tried flowers... 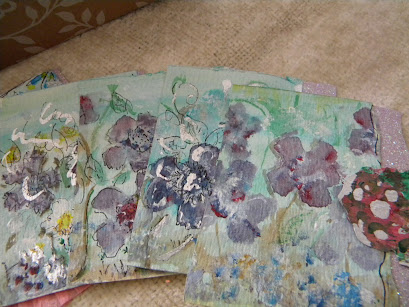 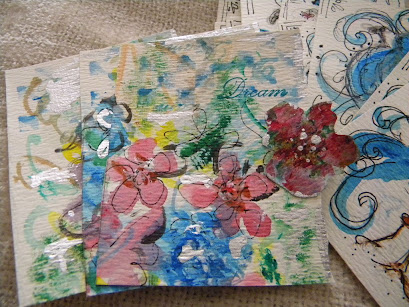 And after that some lanterns that I'd been doodling. 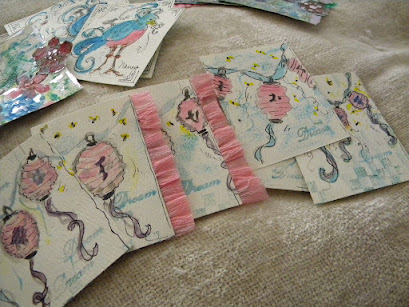 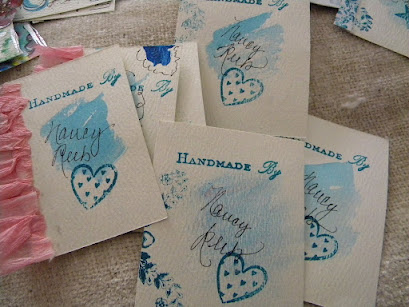 Here's a plateful of some of my IBB's.  Look how many of them are pink! 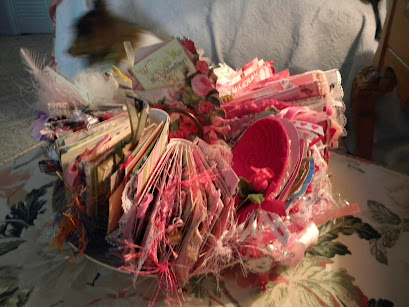 In my computer disaster I lost Windows Live Writer and I'm just getting used to using blogspot again. Boy is it touchy!

We're getting rain this weekend so that's always a good thing.  I'm even willing to sit in the rain at the football game tonight.  Here I am last Friday night at the game. 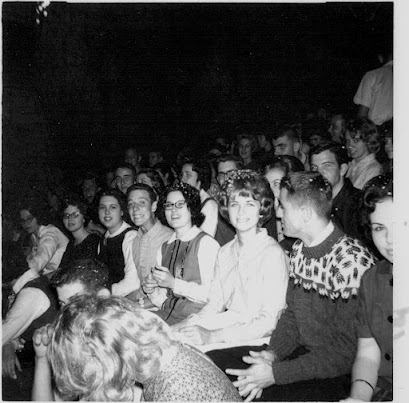 I'm going to join Beverly and her band of pink blogs for Pink Saturday.  So stop by there and say hello!
xoxo Nancy